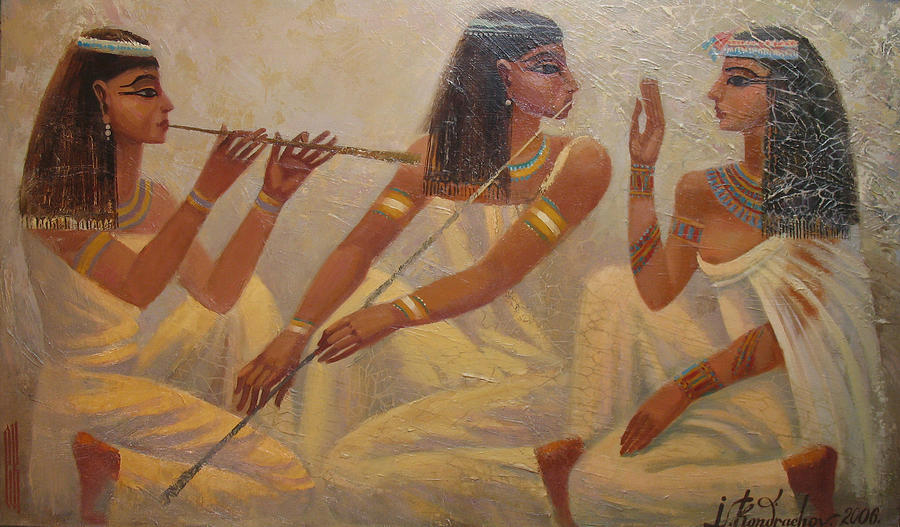 MUSIC OF EGYPT by VALENTINA KONDRASHOVA.

Music played a very important part in the highly developed social and cultural country of Ancient Egypt. In Egypt instruments were usually identified with the primary deities such as Hathor, Isis and Sekhmet and these deities would often be shown playing musical instruments such as the sistrum, drum and menit. Whether out in the street, in the temple, the palace or tombs music was part of many events, whether for religious, celebratory or pure entertainment purposes. Itďż˝s believed that rhythmic music was used in most Egyptian religious practices such as liturgy, rituals and processions and the pictorial evidence shows that many musicians were women. During the new Kingdom these females were highly trained and employed by large temples as priestesses and were known by the name "sem'ayt. Usually they were the wives or daughters of the priests and began to hold such titles as, Song-stress of Amun. These women became quite powerful in their own right, holding high positions close to Pharaoh with the highest musician bearing the title Chief of the Singers of Pharaoh.

Wonderful work and congrats on your sale!

Congratulations, your beautiful artistic work is Featured on the home page of the "Bedroom Art Gallery" group.

Congrats on your sale!!

Congratulations on your feature in the Fine Art America Group "Images That Excite You!"

Congratulations, your work is featured on the homepage of "Created by My Hands"

Congratulations on this marvellous painting being FEATURED in “PAINTING THE OLD WAY” , L/F….group administrator, John Malone (You may also want to participate in our discussion thread, I would appreciate that)

Madalena, thank you very much for the feature in the group!

Congratulations, your creative and unique art work is Featured on the home page of the "Out Of The Ordinary 1 a day" group!

Thank you very much for the feature in the group, Lyric Lucas!

Marcia, thanks a lot on behalf of Valentina! ~~Jenny

Congrats...your awesome work has been featured in 500 views group and shared.

Thank you very much for the feature in the group, Chris!

Congratulations on your outstanding artwork! It has been chosen to be FEATURED in the group “500 VIEWS.”

Thank you very much for the feature in the group, Mariola!

Thank you for the feature in the group People, Svetlana!