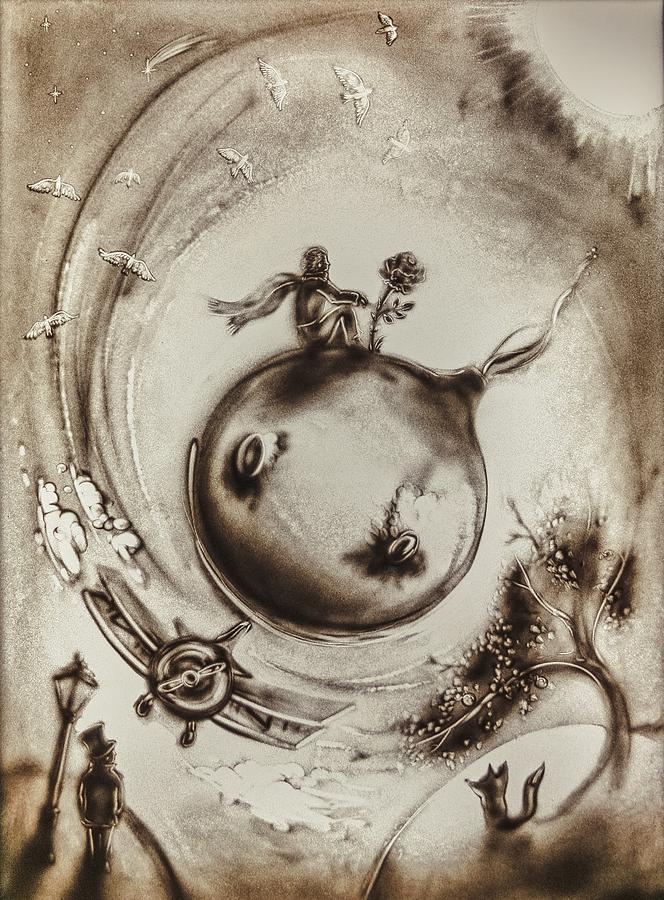 THE LITTLE PRINCE by ELENA VEDERNIKOVA.

Sand art is the practice of modelling sand into an artistic form, such as a sand brushing, sand sculpture or sandpainting
Unique art creating with pure sand on the glass table. The picture exsist just for some hours and than removing. Its never repeating and never exsist more than one day. Fleating art wich you can have only in prints after its dissapeared..


The Little Prince. Chapter 9.
I believe that for his escape he took advantage of the migration of a flock of wild birds. On the morning of his departure he put his planet in perfect order. He carefully cleaned out his active volcanoes. He possessed two active volcanoes; and they were very convenient for heating his breakfast in the morning. He also had one volcano that was extinct. But, as he said, "One never knows!" So he cleaned out the extinct volcano, too. If they are well cleaned out, volcanoes burn slowly and steadily, without any eruptions. Volcanic eruptions are like fires in a chimney.
On our earth we are obviously much too small to clean out our volcanoes. That is why they bring no end of trouble upon us.

The little prince also pulled up, with a certain sense of dejection, the last little shoots of the baobabs. He believed that he would never want to return. But on this last morning all these familiar tasks seemed very precious to him. And when he watered the flower for the last time, and prepared to place her under the shelter of her glass globe, he realised that he was very close to tears.

Congratulation.....your wonderful work has been featured in the 1000 Views on 1 Image Group l/f/p

Congratulations, your excellent work has been featured on Book Covers (1 image a day) Group.

Congratulations, your artwork is being featured in the FAA group “Modern Art”.

Congratulations, your creative and unique art work is featured in the "Out Of The Ordinary 1 a day" group!

Congratulations for selling this lovely work !!!

Michel, thank you very much on behalf of Elena! ~~Jenny

Congrats on your sale, Elena! Your work is beautiful!

Thank you very much on behalf of Elena, Hao! ~~Jenny

Beautiful work Elena! and Congrats on your sale!!

Thank you very much, Chrisann!

Congratulations on your sale. A wonderful representation of that passage in "the Little Prince".

Vanessa, thank you very much! On behalf of Elena ~~Jenny

Thank you very much to a buyer from Eppalock, Vic - Australia who purchased a Duvet Cover of The Little Prince! Best wishes!

John, thank you very much to feature this image in the group!