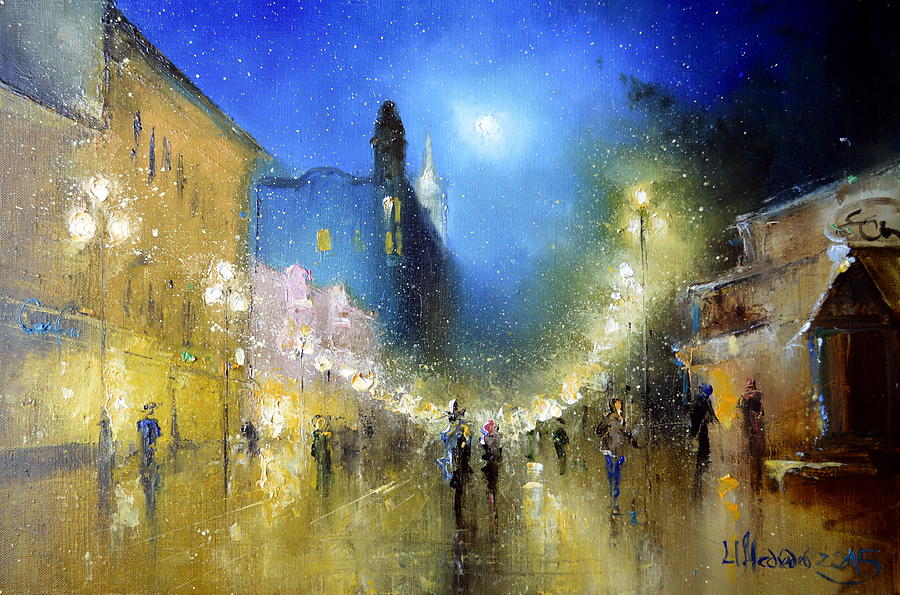 The Old Arbat
The most famous street in Moscow lies to the West of the Kremlin, where its 1.25km span stretches from ploshchad Arbatskaya to ploshchad Smolenskaya. It is one of the oldest roads in the city and was first mentioned as early as 1493, in connection with a fire that started here in the Church of St. Nicholas.
Originally a suburb where traders from the East would arrive with their caravans, in the 18th Century the Arbat became popular with Moscow's intelligentsia and artistic community, who enjoyed frequenting the many cafes and taking strolls along the area's mansion-lined boulevards. Pushkin himself lived here with his wife in house number 53 (the building has since been turned into a museum dedicated to the poet) and Tolstoy resided on the adjoining Kaloshin Lane. In fact Count Fyodor was said to have modelled his famous character Anna Karenina on Maria Gartung - Pushkin's oldest daughter, who also lived nearby.

Congratulations your beautiful work is being featured in the World We See Group:-)

One of your peers nominated this image in the 1000 views Groups nominated images by your fellow artist in the Special Features #3 promotion discussion. Please visit and pass on the love to another artist. http://fineartamerica.com/groups/1000-views-on-1-image.html?showmessage=true&messageid=3007290

lovely work! nominated for a feature in the 1000 Views group!

Joan, thank you very much!

Marian, thank you very much on behalf of Igor! ~~Jenny

A great work this! Igor, this has feeling! Love your brushwork!

Mario, thanks a lot on behalf of Igor!

Eti Reid thank you very much to feature ARBAT NIGHT LIGHTS in the group Visions of the Night!

Jouko, thanks a lot for feature ARBAT NIGHT LIGHTS in the group Art from the Past!

Romuald, thank you very much for the feature in the group Arts Fantastic World!

Saw this magnificent beauty on the home page of Art From The Past and had to track it down to enjoy it closer up. Another amazing, spectacular, fabulous work from you ... I'm just in awe. Loved reading your history as well. Have to ask, was Pushkin's oldest daughter's life story a tragic one as well?? Great, great work of art!!!! What joy to view!!! l/f and t

Lois, on behalf of Igor, thank you very much! ~~Jenny. And you are right regading oldest daughter of Pushkin - Maria Gartung - she lost her husband and later in life she met the great russian writer Lev Tolstoy who made her portrait in his book Anna Karenina. You can read it here: http://aarticles.net/biographies/1455-povtorila-li-sudbu-anny-kareninoj-doch-pushkina.html

Allison, thanks a lot on behalf of Igor! ~~Jenny

On behalf of Igor, thank you very much, Yazmin! ~~Jenny

Congratulations, your artwork is being featured in the FAA group “Modern Art”.

Thank you very much, Barney!